NH Oil Undercoating  ® Year after year millions of Americans invest in new or used automobiles. Keeping these automobiles running smoothly is even more important in these economically hard times. When it comes to car maintenance, preventative measures are not only necessary but less costly than owing thousands to fix a major repair. When it comes to rust the same is true. Don’t wait for a nick a ping or a scratch to rust and cause widespread structural damage to your vehicle, take care of it as soon as you can before the rust starts.

Rust Proofing vs Oil Undercoating Your vehicles metal undercarriage is virtually unprotected from stones, road salts, gravel, dirt and moisture that can compromise and corrode your metal undercarriage and allow oxygenation that will cause your undercarriage to rust  crevices and hard to detect areas of your vehicle. What should be done to protect it is the next question. Here are two different approaches to protecting your vehicle from rust. Rust Proofing: Rust proofing your undercarriage consists of a rubberized coating applied in the factory while your car is new. This can be a very effective approach at preventing rust for up to 5 years, however, over time the rust proofing can be compromised by stones kicking up and chipping the rust coating especially in the harsh New England winters giving you a false sense of security. Some of the most vulnerable areas are seen just inside the wheel wells and right behind the wheels. Factory Rustproofing NH Oil Undercoating is Safe to work with. Harmless for the environment. The fact is, a new vehicle is subjected to thousands of spot welds and numerous bends and folds during production.
This process damages the pre-coated metal, allowing exposure to the corrosion process. Besides cosmetic damage,corrosion also weakens a vehicle’s structural integrity and can affect steering and suspension components.

The use of road brine solutions to remove snow and ice from roadways has proven even more effective and more economical than rock salt and sand but for all motorists this has come at an increased cost.

That’s because road brine a liquefied compound with about 23 percent salt content — can be even more corrosive than its dry alternative to a car or truck’s exhaust system, gas tank and other undercarriage components, according to a new report from the American Automobile Association.

Engineering experts with AAA have concluded these road-clearing materials have cost U.S. drivers an estimated $15.4 billion in rust repairs over the last five years, or approximately $3 billion annually.

The average fix for motorists costs $500, the report concluded. Could be substantially less if you oil undercoat your vehicle. Rust Proofing vs Oil Undercoating  How to videoWorkshop 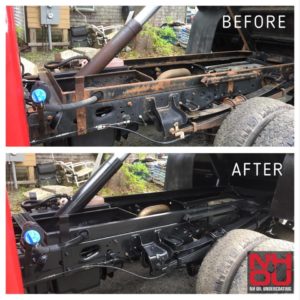 NH Oil Undercoating is designed to create a barrier that can’t be broken, chipped or cracked. By staying fluid, our petroleum-based rust protection heals back over after any abrasions providing lasting protection, even in extreme conditions!

Schedule your oil undercoating appointment with us today, call 603-491-9012 Allow 1 hour for appointment