We can’t even count how many times we’ve heard people say, “Get a car made out of aluminum or plastic. Then you won’t have to 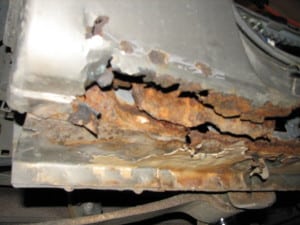 worry about rust.” It seems to be a popular myth, even among well-educated, thinking people. And it’s understandable: if you’ve been told that aluminum and plastic vehicle parts can’t rust, and you’ve never heard anything to the contrary, why would you doubt it? It’s a common selling point for not only cars but for a great variety of products.

Unfortunately, it’s also not true. Okay, technically, it is true. ‘Rust’ is a very specific word that applies to the corrosion of iron, so if your vehicle isn’t made of iron (or steel, which is mostly iron), then, technically, it can’t rust.

Rust: the red or orange coating that forms on the surface of iron when exposed to air and moisture, consisting chiefly of ferric hydroxide and ferric oxide formed by oxidation.

But aluminum is still very capable of corrosion. Aluminum corrosion is essentially the same thing as rusting, but because it’s aluminum instead of iron, the dictionary says we can’t call it that. Don’t be fooled: aluminum vehicle bodies can still develop holes, cut you with their sharp edges and eventually fall off, just like steel ones.

Corrosion: a process in which a solid, esp a metal, is eaten away and changed by a chemical action, as in the oxidation of iron in the presence of water by an electrolytic process.

Even plastic degrades in the presence of magnesium chloride, which is a popular deicing chemical for roads. The good news is that the treatment that’s proven to work best at preventing rust on our vehicles’ steel parts also helps prevent corrosion and other decay to aluminum, plastics, and other materials as well. So no matter what your vehicle is made of, you should still get rustproofing.

The dictionary may tell you that rust happens only to iron, but your vehicle won’t know the difference. Whether the technically correct word is rust, corrosion, degradation or decay, the treatment we call “rustproofing” is still both necessary and effective. The best kind of rustproofing, according to multiple scientific studies, is the preventive application of an environmentally friendly chemical mixture which in New Hampshire is called NHOU® . While the name and the exact formula can vary by location, the basic substance (and the scientific reasons why it works so well) are both laboratories proven and time tested.

NHOU® is available from The Rust Stop Pro, in Chichester NH. The reason NHOU®  may be slightly different from formulas used in other states and in Canada is that it’s constantly under review by chemists. The chemicals that our vehicles are exposed to are always changing as safety technologies develop and social and political trends change. Because of this, The Rust Stop Pro stays on top of the changing conditions and works closely with chemists to ensure that NHOU® remains the best protection your vehicle can get.