How to keep your car- truck from rusting

How to keep your car- truck from rusting An area that people often ignore when it comes to car truck maintenance is the bottom of the vehicle. Otherwise known as the undercarriage, it’s also the area that requires the most care, as it’s extremely susceptible to rust. Instead of taking the “out of sight, out of mind” approach, give your undercarriage the care it needs.

Below, we’ve listed a few tips that’ll help you care for your undercarriage and prevent you from getting a rusty car. Follow them and keep your car’s undercarriage rust-free.

Check Your Undercarriage for Signs of Rust First thing’s first, it’s important to regularly inspect your car and its undercarriage for signs of rust. Aside from the undercarriage, other areas to pay attention to are the fenders and other areas not immediately visible.

Hints of rust aren’t always obvious. Even something as innocent as a tiny scratch or nick can spell trouble. Keep an eye out for small scratches and treat them before they begin to erode. Also, look for dark spots in the paint, as these are usually symptoms of rusting metal beneath.

Checking the undercarriage is tricky if your car sits low and you don’t have the equipment to raise it. In that case, get your mechanic to inspect it next time you bring your car in for an oil change.

How does rust start?

As the acid attacks the iron, water breaks into hydrogen and oxygen. Free oxygen and dissolved iron form iron oxide, releasing electrons, which can flow to another part of the metal. Once rust starts, it continues to corrode the metal.

Here in the Northeast, transportation departments for that matter, pre-salt roads in anticipation of snow. Pre-salting the roads is exactly what it sounds like. Dump trucks, filled with the brownest salt available, scatter the aggregate sodium chloride out the back via a sideways spinning hamster wheel.

Think it can’t get worse? With the introduction to salt brine on the roads. The use of brines is known as anti-icing or pre-wetting measures.

Brines have the same melting characteristics of solid rock salt, but since it is applied in liquid form, the salt can begin to work immediately. The brines are also more effective in lower temperatures. They work their way into seems, spot welds, and the inner body cavities where rock salt could not. Salt eats a clear coat and causes corrosion Sometimes resulting in structural failure.

If that’s not practical advice and you can’t move to Arizona here are some reasonable measures you can take to keep your car-truck from rusting.

Puddle water is basically dirty salt water mixed with all the grime on our roads, and those aren’t exactly spotless. You should avoid driving through big puddles of standing water when you can. Otherwise, the salty puddle water will splash up into the undercarriage and facilitate the formation of rust. Check your vehicle’s drain plugs and make sure that they are not blocked with leaves or other dirt and debris. Blocked drain plugs allow water to collect and cause rust.

Once rust forms, it never really stops. That’s why when it comes to your precious vehicle, the best “cure” is preventative treatment.

The fact is, a new vehicle is subjected to thousands of spot welds and numerous bends and folds during production.
This process damages the pre-coated metal, allowing exposure to the corrosion process.

The best way to protect your car against road salt that causes rust is to have the body oiled annually with a rust-proofing spray. There are automotive shops like NH Oil Undercoating® that specialize in rustproofing.

How does NH Oil Undercoating® Work? NH Oil Undercoating® is a unique blend of highly refined petroleum, rust inhibitors that guard against rust and corrosion on all metals.  It eliminates moisture containing salt, dirt, and other pollutants from the metal providing long-lasting protection for your vehicle.

NH Oil Undercoating protects metals by displacing moisture and treating the surfaces with highly effective corrosion inhibitors. The corrosion inhibitors form an adsorbed (bonded). layer on the metal surfaces. This microscopic layer acts like a series of tiny umbrellas, shielding the surfaces from water molecules. Just as a car battery will not work without its electrolyte, metal corrosion will not occur if moisture does not contact the metal

After NHOU® Oil Undercoating® is applied, you can expect it to lift and remove dirt, moisture, other contaminants, and even some surface rust. It is designed to penetrate the good metal and form its protection there. It will continue to penetrate to the good metal, pushing out existing moisture and oxygen thus eliminating oxidation-corrosion.

Once NH Oil Undercoating® has reached the good metal, it sets up a bond. This bond is at a molecular level and the film that is created is ultra-thin providing long-term protection. The inhibitors, meshed together in a chain link, are then used by the environment – contaminants, salts, etc… – before the metal is rusted. 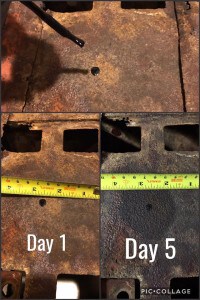 NH Oil Undercoating® is designed to creep deep into cracks, crevices, spot welds, seams, folds and provide protection there as these areas up prone to hold moisture and are unprotected. So even if the initial application cannot reach one of these areas, this creeping process makes sure the maximum protection is provided!

Yes. NH oil undercoating® Back N Black not only protects but it improves the appearance of any metal surface! 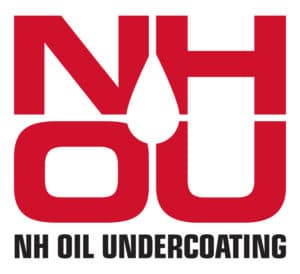